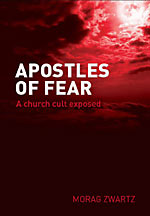 I am currently reading a recently released book by Morag Zwartz entitled Apostles of Fear. It is a tragic story about a number of events that have taken place over the years in two related churches: Melbourne Christian Fellowship (formerly called "Immanuel") and Brisbane Christian Fellowship, under the leadership of Vic Hall. The injustices done to so many people over so many years needs bringing to the light and confronting appropriately.

My dad, Kevin Conner, was involved in Immanuel (now Melbourne Christian Fellowship) in the very early years. Ray Jackson was the leader of the church at the time and after becoming aware of some of the immorality taking place, my dad confronted Ray directly. Unfortunately, Ray did not respond and he began to shut my dad down and eventually excommunicated him from the church. My dad continued to help people as he was able but was basically cut off from the church.

Our family moved to the USA in 1971 where we lived for 10 years. When we returned in 1981 we became involved with Richard Holland and Waverley Christian Fellowship (now CityLife Church). By this time Richard had cut off all relationship with Immanuel. Essentially, my dad has had nothing much to do with Immanuel since 1971.

Morag had a brief meeting with my dad and I while doing research for her book. Unfortunately, because my dad didn’t know Morag, he chose not to say very much at all to her about his experiences with Immanuel. As a result, Morag ends up shedding a fairly negative light on my dad and his perceived lack of action in confronting issues within this church. Due to people such as my dad not saying much to Morag (I now wish he had), she makes a number of unsubstantiated claims in her book and she lacks some of the details needed to paint a complete picture of what actually took place, especially during the early years of this group in Melbourne.

What I do know is that my dad has been very saddened by the developments that have taken place in Immanuel after his departure and the many people who have been hurt. He believes that he did all he could at the time in confronting Ray Jackson and he has helped as many people who have left as he has been able to.

Hopefully, this book will be a wakeup call against all forms of abusive leadership within any church, a leadership style which is so un-Christlike. I pray it will also encourage those within cultic groups characterised by fear, manipulation, and control to leave and to know that there is hope and healing available for them.

Thanks for your comments

P.S. I have just finished reading the book (17/12/08). Morag has done a good job of exposing the abuse and theological errors of this group. The extreme authoritarianism and intrusion into families that she writes about, especially at BCF, is just awful. Having left 'Immanuel' in Melbourne when I was 10 years old, I have had no direct experience with them as a group since then, although I have heard similar stories of people who have left MCF. It is a very sad story overall and I trust that the book will help bring these people to account, help those who are still trapped in this cult, and give hope and healing to those who have already left.

[Refer also to my other posts on: Spiritual Abuse]

43 thoughts on “Apostles of Fear”