Are you a duck out of water? 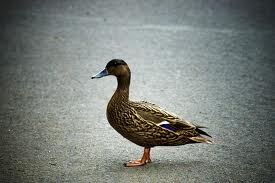 Once upon a time, right after creation, all the animals formed a school. They established a well-rounded curriculum of swimming, running, climbing and flying. All the animals were required to take all the courses.

The duck excelled at swimming. In fact, he was better than the instructor! But he only made passing grades in climbing and was very poor at running. He was so slow, he had to stay after school to practise running. This caused his webbed feet to become so badly worn he became only average in swimming. But average was quite acceptable, so no one ever worried about it, except the duck.

The rabbit was top of her class at running. But after a while, she developed a twitch in her leg from all the time she spent in the water trying to improve her swimming.

The squirrel was a peak performer climbing, but was constantly frustrated in flying class. His body became so worn from all the hard landings he did not do too well in climbing, and ended up being pretty poor in running.

The eagle was a continual problem student. She was severely disciplined for being a nonconformist. In climbing class, she would always beat everyone else to the top of the tree, but insisted on using her own way to get there.

Each of the animals had a particular design. When they did what they were designed to do, they excelled. When they tried to operate outside their area of expertise, they were not nearly as effective.

Can ducks run? Sure they can! Is that what they do best? No! Given the limited time each of us has, doesn’t it make sense to serve where we are best equipped? Ducks can run and run hard. But they are slow and get tired quickly.

People in ministry can be like that. Like a duck out of water, we can serve outside our area of giftedness. We can do it, but it is not what we do best. That is why knowing your spiritual gift(s) is important. It enables you to do what you do best with enthusiasm and effectiveness.

Imagine a church led by leaders, taught by teachers, cared for by pastors, administered by administrators, with evangelists using their gifts, givers giving, mercy showers showing mercy, etc … That’s what every church should be like. This is the way God has organised the church and wants it to function.

Spiritual gifts are “special abilities
distributed by the Holy Spirit to every believer according to God’s design and
grace for the common good of the body of Christ.” God calls us to understand our individual
uniqueness and appreciate the differences of other people. His intention is that we work
together in interdependent relationships. By ourselves, we can’t accomplish
much, but networked with other believers, we can accomplish incredible things
for God.

Each person is unique with different combinations
and expressions of gifts through their personality. There are different levels of
gifting based on the different calling and capacity of each person. God wants each one of us to discover,
develop and deploy our gifts for the benefit of the church and its mission.

Jump in and SERVE!