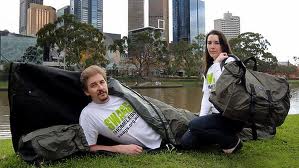 Congratulations to Tony and Lisa Clark who were selected as the winners of the Australian Human Rights Commission – Community Organisation award at a ceremony in Sydney today.

Tony, who founded Swags for Homeless in 2007, started the non-profit homeless charity in Melbourne when he questioned what was given to street sleeping homeless turned away from shelters. Tony and Lisa Clark designed the emergency relief Backpack Bed, which received the worlds largest and most prestigious product design award the Red Dot ‘Best of the Best’ in Germany this year. Backpack Beds are provided to homeless and are distributed through 139 charities around Australia.

“As well as warmth and protection, the Backpack Bed provides the homeless with dignity,” said Mr Clark.

This year the Backpack Bed also received an Australian International Design Award and the Sydney’s Powerhouse Museum Design Award for innovation and benefits to its users.

Paul Moulds AM (Major) from The Salvation Army says the Backpack Bed has been invaluable to their organisation and used in many of their outreach programs for the homeless.

“It’s a grim reality that many people currently do not have access to safe or affordable housing and are living on the streets,” said Major Moulds.

Across 139 charities approx. 3000 Backpack Beds were distributed in 2011 which Mr Clark says falls well short of the required 21,000 needed to assist homeless across Australia.

“It’s extremely gratifying to receive the Human Rights nomination and the other awards this year, however the real acknowledgement we need is from the government in terms of funding,” added Mr Clark.

A staggering 16,375 men, women and children will be sleeping on streets across Australia with 2,204 of those in Victoria alone (ABS figures 2006).

“We had to turn away 39 organisations this year pleading for our study proven Backpack Beds due to the lack of funding, it’s heartbreaking.”

Mr Clark says $2.1 million in funding would cover the costs to produce enough Backpack Beds to assist the street sleeping homeless across Australia, which includes $284,000 to cover Victoria.

From April 2012, the Clark’s Backpack Bed will be available from 90 retail stores with all proceeds going to support the continued work of Swags for Homeless.