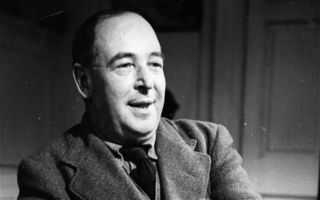 By Alistair McGrath for The Telegraph

With simplicity and elegance, he captured the imagination of a war-weary generation.

Today it will be announced that a memorial to the poet, literary scholar and novelist C S Lewis (1898-1963) is to be placed in Poets’ Corner at Westminster Abbey next November, 50 years after his death. He joins a select group of poets, playwrights and writers to have been buried or commemorated there, including Geoffrey Chaucer and William Shakespeare. I would argue that Lewis certainly merits inclusion among these greats of English literature.

Has he secured his place because he was a poet? He certainly had early aspirations in that direction. Born in Belfast, he hoped to become an “Irish voice” in poetry, with W B Yeats as his model. Yet little came of this aspiration. His first slender volume of verse, Spirits in Bondage (1919), was published under the pseudonym “Clive Hamilton” (Hamilton was his mother’s maiden name). Many of these poems were written while he served as a junior officer in the trenches of northern France during the First World War.

The early poems remain a powerful witness to Lewis’s early atheism, railing against an absent and uncaring God who failed to halt the slaughter the author saw around him. But he never achieved recognition as a “war poet”, like Rupert Brooke and Siegfried Sassoon, who are also commemorated in Poets’ Corner. Indeed, not only did he fail to secure recognition for his war poetry, he was not acclaimed as a poet of any kind, as the lack of interest in his second volume of verse – Dymer (1926) – made painfully clear.

He went on to secure his reputation, rather, as a literary critic at Oxford and Cambridge, offering important assessments of the poetry of others, especially Edmund Spenser and John Milton. He excelled at this task. His work on Milton drew attention to an aspect of his poetry that had been neglected – how it sounded to its readers. Lewis became acutely sensitive to the rhythm of the English language, whether poetry or prose. He never used a typewriter, explaining that the clattering of its keys destroyed his “sense of rhythm”. For Lewis, a fountain pen enabled its user to be attuned to the melody of language.

In the end, the poetic vision that Lewis never quite managed to actualise in his verse was found instead in his prose. Here we find one of the keys to his success as a writer – his ability to express complex ideas in simple language, connecting with his audience without losing elegance of expression. Lewis learnt this skill the hard way, partly through lecturing to aircrews during the Second World War. If you could not express something in simple language, Lewis later declared, it was because you had failed to understand it yourself.

Lewis is one of the best examples of a writer who took pleasure in the art of communication, melding simplicity and elegance in a way few could manage. His popular religious writings – such as The Screwtape Letters and Mere Christianity – combine these qualities, even though they cannot be counted as great literature.

Yet this alone does not explain his inclusion in Poets’ Corner. The real reason he deserves his place is on account of his works of fiction, which captured the imagination of his public, especially in the dark days after the Second World War. Supreme among these are his Chronicles of Narnia, especially The Lion, the Witch, and the Wardrobe (1950).

Although he had no children of his own, Lewis produced a work that captured the imagination of a generation of younger readers. The noble lion Aslan, lord of the mysterious world of Narnia, has become one of the most familiar Christ-figures in English literature. Some, understandably, find the Narnia books problematic on account of the “golly-gosh” language of the Pevensie children, or a suspicion that female characters are allocated subsidiary roles in the narrative. Yet they remain a classic in their field, serving as a model for both Lewis’s literary imitators and critics.

It was not simply that Lewis had written children’s stories that captivated their readers. Lewis developed these stories as vehicles of theological exploration, allowing him to explore sophisticated ideas without compromising the pace of his narrative or losing the patience of his readers. Narnia, Lewis later explained, was about “supposals”. Suppose God did become incarnate in a world like Narnia. What would this look like? More importantly, what would it feel like to be part of this world?

Lewis revealed the imaginative capacity of children’s literature to engage and explore the deepest questions of life, to bring a new quality of engagement to the genre. The writer himself was convinced that he would be forgotten within five years of his death; he would have been taken aback by the renewal of interest in his writings since the Eighties. Surveys now regularly identify him as one of the most significant literary voices of the 20th century. Lewis has made what is probably the most difficult transition an author can hope to make – being read by more people a generation after his death than before it.

Lewis died on the day President John F Kennedy was assassinated. In a speech given at Amherst College four weeks before his death, honouring the great American poet Robert Frost, Kennedy paid a typically handsome tribute to the work of poets and writers. “We must never forget,” he declared, “that art is not a form of propaganda; it is a form of truth.” Lewis would agree. He rightly takes his place among those honoured for their enrichment and expansion of our vision of reality.

Alister McGrath is Professor of Theology, Ministry and Education at King’s College London. His 'C S Lewis: A Life’ will be published by Hodder in April 2013.