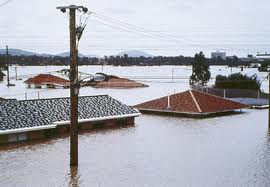 Australia's beautiful state of Queensland is experiencing horrific floods right now, the worst in our history. Over one third of the state is a disaster zone. Lives have been lost and many people are missing. The floods have now hit the city of Brisbane, Australia's third largest city, with many 1000s of people having to evacuate their homes.

Please pray – for the residents, the recuse workers, the political leaders and for local church communities. Difficult times such as these always provide an opportunity for followers of Christ to show His love and compassion in practical ways.

Also, why not consider making a financial donation to the relief effort.

When natural disasters, such as these floods, take place on our planet, many people wonder where God is, what is the cause, and whether this is a sign of judgment (click here and here for examples). I have addressed these issues before when the Victoria bush fires took place (click here and here), as well as the Asian tsunami. Follow the links for some related thoughts.

14 thoughts on “Devastating Floods in Queensland”