Everybody’s Normal … Till You Get to Know Them 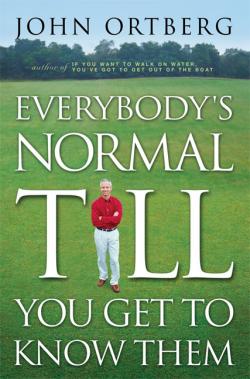 Connecting with other people in close relationship is not as easy as it sounds. Sometimes we can develop an idealistic picture of what community should be, even in the church. The truth is that developing close and enjoyable relationships is not easy. John Ortberg has an excellent book on relationships with a great title: Everybody’s Normal – Till You Get to Know Them. How true is that!

Have you ever bought something from a shop that said ‘as is?’ You know right away that the item is most likely slightly irregular or that something is missing or that it doesn't work just quite right. It is not normal. There will be no refunds, no returns and no exchanges. That’s what it’s like dealing with humans. If you’re looking for perfection, you’ve walked down the wrong aisle. The sooner we realise this, the better. We must have realistic expectations.

Of course, the really painful part is that I am in the ‘as is’ department too. We don’t like to admit that. We’d rather separate the world into normal, healthy people (like us) and difficult people (everybody else). The truth is that no one is totally normal. All of us have sinned and fallen short of God’s glory.

Have you ever considered the families that God used as told in the book of Genesis? Cain was jealous of Abel and killed him. Noah – the most righteous man of his generation – got drunk and cursed his grandson. Lot offered his virgin daughters to some men who were trying to violate some visitors. Abraham played favourites between Isaac and Ishmael. Isaac played favourites between Jacob and Esau, who were bitter enemies for twenty years. Jacob played favourites between Joseph and his other eleven sons (the brothers wanted to kill Joseph and ended up selling him into slavery). Jacob’s firstborn son, Reuben, slept with his father’s concubine. Another son, Judah, slept with his daughter-in-law when she disguised herself as a prostitute.

The description of these families in Genesis reads like a script from Days of Our Lives! These people need a therapist … or something. I know … some of you are feeling better about your family already. This is the cast of characters God has to work with. None of them are ‘normal’ and neither are we.

More about that tomorrow … as we begin looking at seven skills for connecting with other people.