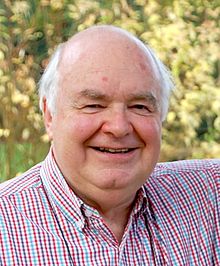 Unfortunately, many people today see science and faith as enemies rather than friends. Thankfully, there are an increasing number of scientists and intellectuals who are speaking out about their faith. John Lennox is one of them.

John Lennox, Professor of Mathematics at Oxford University, is an internationally renowned speaker on the interface of science, philosophy and religion. He regularly teaches at many academic institutions including the Said Business School, Wycliffe Hall and the Oxford Centre for Christian Apologetics, as well as also being a Senior Fellow with the Trinity Forum. He has written a series of books exploring the relationship between science and Christianity and he has also participated in a number of televised debates with some of the world’s leading atheist thinkers. Check out his excellent web site.

There are also many very good videos available of him speaking or debating atheists. For exampe, he gave this presentation at the 2013 Xenos Summer Institute (www.xenos.org/xsi) – "Has Science Buried God?". It's well worth watching – You Tube video.