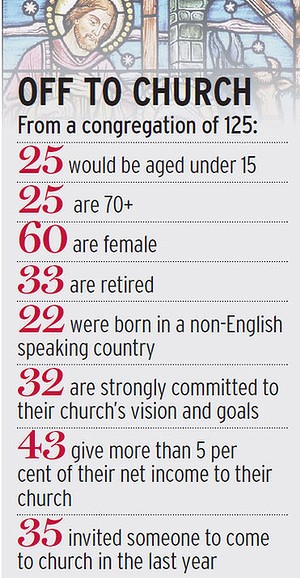 FALLING church attendances in Australia may have plateaued and churchgoers are considerably happier than 10 years ago, according to the five-yearly church ''census''.

''The complete Australian church is growing stronger, or holding its ground, and those who go to church are feeling pretty good about it,'' said Associate Professor Ruth Powell, from the Australian Catholic University and research director of the National Church Life Survey.

''The churches are not out of the wilderness yet, but the signs are good.''

An initial analysis suggests the attendance decline has stopped. In Britain – which Australia is likely to follow – the decline has plateaued and even reversed in some cases, Professor Powell said.

The survey, believed to be the biggest in Australia after the national census, and the largest survey of church life in the world, involved 3000 churches from 23 denominations, with 260,000 adult churchgoers and 10,000 children aged 10 to 14 questioned.

The results just released are ''first impressions'', with more detailed research yet to be sent to the denominations taking part. They reveal that the average age of church attenders is 55 – up from 52 five years ago, and older than the Australian average. Six in 10 are women.

Churchgoers are highly educated, with more than one in three having a degree, Professor Powell said.

The Uniting Church faces a crisis, with 67 per cent of its members older than 60 and 45 per cent over 70. One in two Catholic and Anglican church-goers are over 60, but only one in three Baptists and one in 10 Pentecostals.

The mainstream denominations are still feeling the loss of the baby-boomer generation, a long-term pattern that will continue for another decade, according to Professor Powell. Half of all church attenders are Catholics, followed by Anglicans. Sydney Anglicans have a younger average age than the rest of the country.

The survey measures nine ''core qualities'' of internal church life, nearly all of which continued a strong pattern of improvement over the past decade. These include ''an alive and growing faith'', with 86 per cent of people saying their faith has grown; ''vital and nurturing worship'', with 76 per cent finding the preaching at church helpful; and ''strong and growing belonging'', with 82 per cent of those who attend church going weekly and 95 per cent at least monthly.
'

"Across nearly all sectors there is increased health and vitality,'' Professor Powell said.

''More people are saying they are growing in their faith than a decade ago, there is an increase in belonging, a strong sense of commitment to the vision of the church, and churchgoers are more likely to be involved in acts of service, whether as individuals or in organised welfare than 10 years ago, and you can see this trend very strongly.''