WAKING UP: a Helpful Metaphor for Understanding Christian Conversion 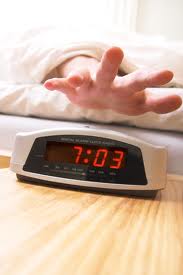 What happens when you wake up in the morning?

For some people, it's a rude and shocking experience. Off goes the alarm and they jump up in fright, dragged out of sleep to face the cold, cruel light of day.

For others, it is a quiet, slow process. They can be half asleep and half awake, and not even sure which is which, until gradually, eventually, without any shock or resentment, they are happy to know that another day has begun.

Most of us know something of both, and a lot in between.

Waking up offers one of the most basic pictures of what can happen when God takes a hand in someone's life.

There are classic alarm-clock stories. Saul of Tarsus on the road to Damascus, blinded by a sudden light, stunned and speechless, discovered that the God he had worshipped had revealed himself in the crucified and risen Jesus of Nazareth. John Wesley found his heart becoming strangely warm, and never looked back. They and a few others are the famous ones, but there are millions more.

And there are many stories, though they don't hit the headlines in the same way, of the half-awake and half-asleep variety. Some people take months, years, maybe even decades, during which they aren't sure whether they're on the outside of Christian faith looking in, or on the inside looking about this to see if it's real.

Sleeping and waking is, in fact, one of the regular early Christian images for what happens when the gospel of Jesus, the good news that the creator God has acted decisively to put the world to rights impinges on someone's consciousness. There's a good reason for this. 'Sleep' was a regular way of talking about death in the ancient Jewish world. With the resurrection of Jesus, the world was being invited to wake up. 'Wake up, sleeper!' writes the apostle Paul. "Rise from the dead! Christ will give you light!"

One thought on “WAKING UP: a Helpful Metaphor for Understanding Christian Conversion”