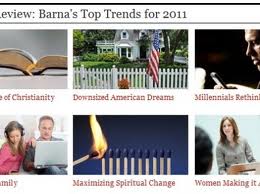 The Barna Group recently released a list of trends it has observed during 2011 from its research in the USA. Although Australia is very different ftom America, there are similarities, and the profound influence of America on the world continues.

Here is the first trend …

1. The Changing Role of Christianity in America.

This year, Barna Group delved into many subjects of faith and culture in America, including the changing role of faith and Christianity. One of those shifts is the relative unknown nature of Christian leaders. Only Billy Graham, the Pope, Barack Obama and Joel Osteen were mentioned by more than 1 out of 50 adults as the most significant Christian leaders. What’s more, 41% of Americans are unable to identify any individual who they consider to be an influential Christian.

Another way in which Christianity hit the mainstream radar was prominent discussion about hell. This issue sparked so much controversy and vigorous debate in part because America is essentially split down the middle on most issues of universalism and religious pluralism. For example, 43% of Americans said it doesn’t matter what religious faith you follow because they all teach the same lessons; 54% of Americans disagree. Half of Americans (50%) believe that all people are eventually saved or accepted by God no matter what they do, while 40% disagreed. With the nation’s population so divided, expect to see these issue continue to stoke lively conversations.

Despite the fact that Christianity’s role is changing, Barna Group discovered in 2011 that there is a great deal of openness among millions of Americans to overtly supporting Christian business and brands. In fact, nearly half of all adults (including all faith groups) said they would be open to purchasing from a business or brand that operates according to Christian principles.

For faith leaders, one of the most favorable Barna findings of the year was the fact that three-quarters of Americans believe that churches are a positive factor in their communities. Just 1 out of 20 adults believe that the influence of churches is negative. While the most common thing that people look to from churches is addressing poverty, churchgoers as well as unchurched residents look to congregations for a range of things.

As always, trends provide opportunities for the church and the work of the kingdom. God calls us to be poeple who understand the times that we live in that we might know how to live. May each of us as Christ-followers and each local church continue to serve God and His cause with faith and passion this year.